2021: the year robots, and graffiti came to a decentralized, smarter Cardano

Beeple used to illustrate our blog posts, but art NFTs made him a millionaire, and then AI and DeFi arrived

Incredibly, given the state of our Covid-shocked world back in January, 2021 has had its fair share of fun. And if 2020 was a big year for Cardano with the upgrade from Byron to Shelley, this year was bigger still. Decentralized block production arrived, tokens went native, contracts turned smart – and there were some world firsts. But, our review of the year is getting ahead of itself, so let’s think back to January....

A hundred community stake pools benefitted when IO Group set out its strategy for delegating its ada funds in 2021. All but one of the IOG public pools were closed and the stake was moved to community operators, to the tune of three million ada per pool. Throughout the year, some 300 pools benefited from the greater chance this gave them to mint blocks. Over the year, the total number of pools running the network has increased by half to about 3,000.

Then, IOG turned to encouraging developers and innovators with Project Catalyst. This experiment explores innovation and collaboration as the first stage in the Voltaire era of the Cardano roadmap. It involves investing actual ada with an initial fund worth $250,000 backing 11 proposals. Since then, it has become the largest fund of its kind, with total funds allocated worth $8m. And the community soon set up a Catalyst website.

In February, fun came to the Cardano blockchain when SingularityNet founder Ben Goertzel and Charles Hoskinson, IOG’s co-founder, got together to explore the future of decentralization, artificial intelligence and social media. As we’ll see later, it wasn’t the end of the shenanigans as the pioneering AI and robotics company began moving its systems from Ethereum to Cardano.

All was not well elsewhere in the crypto world, however, with US Treasury secretary Janet Yellen warning that bitcoin was ‘extremely inefficient’. It was just the start of legislators in Washington and around the world digging into the crypto industry.

March saw IOG bring out the ‘hard fork combinator’ again. This may sound like a piece of farm machinery, but it’s a clever way of taking the stress out of upgrading the blockchain. The Mary upgrade allowed Cardano to become a multi-asset platform. This means that anyone can now mint their own tokens, including non-fungible tokens (NFTs) without even needing a smart contract. Global commentators started to take real notice and the media rolled out its cliche-ridden ‘Ethereum killer’ articles. 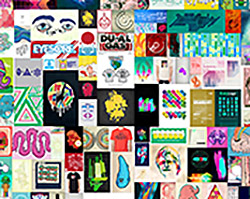 Mike Winkelmann set the world alight when his NFT artwork, Everydays: the First 5000 Days, sold for $69,346,250 at Christie’s. The auction propelled him into an exclusive club for the highest price paid for the work of a living artist, alongside Hockney, Hirst, Johns, and Koons. As ‘Beeple’, his illustrations graced IOG blog posts for two years.

In Germany, a computer science student thought he’d have some fun with the new capabilities of Cardano. Alessandro Konrad switched from writing ‘boring’ smart contracts in Ethereum. He launched his own stake pool with Berry NFTs as rewards for people delegating to his pool. Next up was SpaceBudz NFTs, which he created with a pal. In just two days, 10,000 of these sold at 50 ada each – that’s one way to pay your way through university! 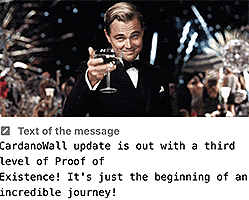 *Blockchain graffiti: an animated Leonardo DiCaprio raising a glass of champagne on the CardanoWall

As the month neared its end, the CardanoWall arrived. This tool helps people put messages on the blockchain as metadata. Most people treat this blockchain graffiti as fun, but be warned – all human life is there. Messages range across the spectrum of high and low culture, from the personal to the political, the philosophical to the pornographic, the surreal to the mundane. Some are self-serving, others life-affirming. Early messages include: Wow! This is cool dude!’ and the Robert Burns poem To a Mouse, ‘Wee, sleekit, cow'rin, tim'rous beastie…’ The first picture appeared at epoch 256, slot 314,340, an animated image of Leonardo DiCaprio raising a glass of champagne. It was soon followed by a view of farmland and, perhaps inevitably, a cat.

*D-Day tweet: ada coin creation was handed over to more than a thousand stake pools on March 31

The last day of March was a landmark; it was D=0 Day. This was when IOG devolved block production totally to stake pool operators. Full decentralization had arrived.

The global buzz around Cardano grew louder with the announcement of an education program with 3,500 schools and five million pupils in April. Blockchains offer great promise in helping to achieve inclusive growth in African economies, and IOG aims to be at the forefront of this progress.

But school was definitely out when CardanoKidz hit the streets. These cartoon NFTs were based on IOHK staff – heaven knows what posterity will make of them!

In May, the COP26 climate change conference was still six months away, but analysts and the media were latching on to Cardano as the environmentally friendly blockchain. Anthony Cuthbertson’s profile, ‘The “green” crypto that hopes to surpass the tech giants’, started the trend.

Another form of media, Wikipedia, saw a record number of hits for its Cardano page, with 13,702 visits on May 15. A year before, there had been no Cardano page because editors pushing a ‘blockchains are terrible’ agenda had taken it down in 2019 as not being ‘notable’. Such was the level of censorship that there was no reference to Cardano – apart from a graphic showing it as one of the top 10 coins! A mention that Philip Wadler, one of the world’s leading computer scientists, was working for IOHK was deleted as ‘spam’. Demand for a Cardano page was demonstrated when it had 5,195 visits the day after it reappeared in October 2020, surpassing Ethereum’s 1,719. Yet, even now, the Cardano page is still under heavy sanctions and only a few Wikipedia editors can add to the copy.

Fun with AI was back when the Hoskinson and Goertzel show took to YouTube again for an update on moving to Cardano, and a chat with Grace, a cutting-edge healthcare robot. Grace asked about the IOG chief’s pet giraffe – and revealed that ‘she’ didn’t like technology!

Nervos, Nexo and Orion all announced projects with Cardano in June, developments with the Daedalus full-node wallet were discussed, and chief scientist Aggelos Kiayias set out the thinking on stabilizing transaction fees by establishing a ‘peg’ to a basket of commodities or currencies. Two months later, development of the Djed stablecoin was announced.

A version of John Conway's Life is a background option on IOG’s home page and Stephen Wolfram used such cellular automata for its live minting of NFTs in July. The Christmas-tree shaped image at the top of this post is one of the images generated. 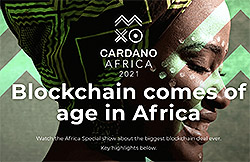 *Africa focus: 250,000 people have watched a video about IOG’s activities in the continent

The importance of mobile phones for global development has long been promoted by the United Nations, and it has recognized the potential for digital technologies such as blockchain. So IOG teaming up with World Mobile in August to help bring cellular networks to some of the remotest regions of Africa should be a boon. More than a quarter of a million people have watched John O'Connor’s video about IOG’s activities in Africa. The mobile deal was followed by the European Business University of Luxembourg offering programming courses to African students.

The month produced a surprise when Ethereum co-founder Vitalik Buterin joined the Dogecoin Foundation board.

The prospect of decentralized finance (DeFi) clearly terrifies politicians in the US. The Financial Times pointed to the furore over imposing tax reporting rules on crypto ‘brokers’, a prospect buried in Joe Biden’s $1tn infrastructure plan. One result was that it brought the fractious blockchain industry together. 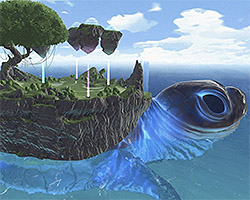 *Cardano's metaverse: 140,000 people logged into the summit, hosted on the back of an ocean-going mythical turtle

September was a busy month. El Salvador became the first country to adopt a cryptocurrency as legal tender. At IOG, the company ramped up for the Cardano Summit 2021 with 70 hours of presentations from 200 speakers. Over two days, 140,000 people logged into the event’s metaverse, hosted on the back of an ocean-going mythical turtle. There was something for everyone, with more fun with robots and debate about the future of art among the technical and community talks. And during the summit the millionth Cardano NFT was minted. And last but not least, September saw the deployment of the Alonzo upgrade, bringing core Plutus smart contract capability to Cardano. Decentralized finance had arrived. As Tim Harrison put it at the time, it was a cause for celebration but really just the beginning of a journey that is now starting to gather pace.

The buzz around the summit and the Alonzo hard fork event attracted the editors at the Harvard International Review, which did a three-part interview in October with IOG’s chief discussing Cardano, the developing world, the future of crypto, and financial regulation. Meanwhile, the strength of the collectibles market was shown when it was reported that the woolly-booted, axe-wielding SpaceBud #9936 had sold for 510,000 ada – the first Cardano NFT to fetch the equivalent of a million US dollars. Plus we saw projects such as Meld gearing themselves up for launch with the first initial stake pool offerings.

Bison-herder Charles Hoskinson also took an IOG team to Africa in October and introduced us all to the ‘smart cow’ effect.

November saw Pool.pm’s count of the number of NFTs minted on Cardano pass the two million mark – and Andy Warhol came to the blockchain. Gallery owner Rudolf Budja launched a ‘fractionalized’ NFT sale so people could ‘own a piece of an Andy Warhol’.

Eagle-eyed Cardano watchers spotted a Cardano logo on the proposed cover of The Economist magazine’s The World Ahead: 2022. This annual analysis sees crypto as a battleground. Fighting for control are the decentralization pioneers building the technology, the big tech barons like Facebook and Google, and governments. The end of November saw the launch of the MuesliSwap decentralized exchange, a Cardano first generating – as might be expected in such a febrile environment – its share of bouquets and brickbats.

December brought the launch of the P2P testnet, a milestone in Cardano’s decentralization journey. Along with this came a release of the Plutus application backend, which will become a set of libraries to help speed development on Cardano. The number of Wikipedia page views for the Cardano page passed the million mark for the year. 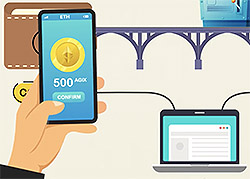 *SingularityNet ERC20 converter: a child explained how to convert the AI pioneer's tokens to Cardano

If all that’s not intelligent enough for you, the much-anticipated testnet for an ERC20 converter to switch SingularityNet’s internal AI token to Cardano sparked a lot of interest. And if it still all looks confusing, see the converter explained by a six-year-old. The past few weeks have also seen more projects start to launch on Cardano, from NFT marketplaces such as Tokhun, Cardahub and CNFT.io adding smart contract integration, to domain naming project Adahandle. And as the DeFi ecosystem starts to take off, in late December, an alliance was announced to help speed it on its way through standardisation and best practice in the shape of the Cardano DeFi Alliance.

As the year draws to a close, we invariably look to the past and the future, as The Economist has done. It's been an incredible year of growth with a community that continues to light the way. We’ve also seen more than our fair share of opprobrium from critics and purveyors of fear, uncertainty and doubt – the ‘FUDsters'. Yet, still we have persevered and start the new year stronger and more resolute than ever. So, in the words of Auld Lang Syne, let’s try to all ‘tak a cup o' kindness yet’ into the next year and hope for a healthier, more blockchain-intelligent 2022.