Blockchains are distributed systems in which records of digital transactions are both publicly verifiable and immutable. Each new transaction is included in a block along with other recent transactions, and the block is then added to a chain of other blocks (hence the term ‘blockchain’).

For a blockchain to operate successfully, the participants – also known as nodes – need to agree on the validity of each new block. Blockchains can use different variations of different consensus protocols to determine eligibility of block-producing nodes.

To ensure continuity, block producers must reach consensus on a particular transaction history. This is achieved by a specific consensus mechanism that guarantees that the participant’s views converge to the same history of events. This ensures trust in the blockchain as a whole, without the need to trust specific participants. Mutually distrustful entities can still participate in the blockchain, comfortable in the knowledge that the blockchain itself can arbitrate and verify their actions.

Different protocols provide varying levels of security, scalability, and decentralization. Each consensus mechanism might claim to be the 'best' solution.

What are the most prevalent consensus mechanisms? 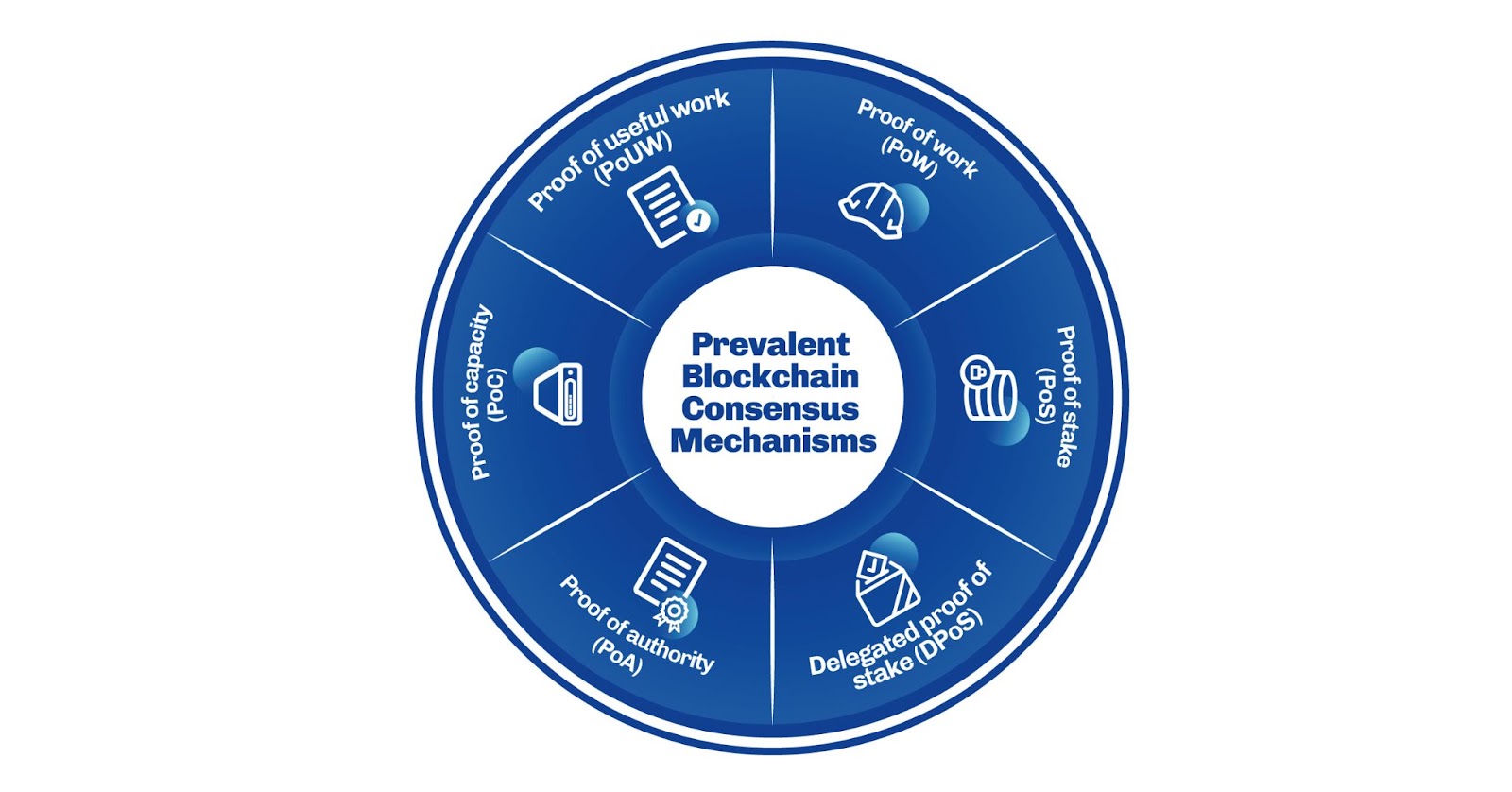 Two of the best-known consensus protocols are proof of work (PoW) and proof of stake (PoS), but others (and multiple variations on the above) also exist. Let’s delve into how some of these mechanisms work and what sets them apart.

PoW was the first blockchain consensus mechanism with Satoshi Nakamoto applying this model to the Bitcoin chain in 2009.

PoW relies on competition between computers (miners) to solve moderately hard puzzles. The next miner to find a possible solution to a query gets to mine a new block on the blockchain.

Here are a few advantages and disadvantages to think about before committing to a PoW chain:

PoS is a newer, less energy-intensive, and thus more sustainable consensus mechanism than PoW. Through PoS consensus, holders of a blockchain asset can participate in securing and validating on-chain transactions by delegating their stake to a validator.

Launched in 2012, Peercoin was the first PoS project. Cardano, Polygon, and Tezos are three popular PoS blockchains. Ethereum has recently moved from PoW to PoS after a successful ‘Merge’.

It is important to note that unlike Ethereum’s version of PoS, however, Cardano’s PoS mechanism:

Ouroboros is Cardano’s PoS consensus protocol and was the first provably secure PoS protocol. In other words, Ouroboros offers mathematically verifiable security against attackers. The protocol is guaranteed to be secure, as long as 51% of the stake is held by honest participants. According to Google scholar, the original paper has been academically cited more than 1400 times, and variants of the protocol are used on other PoS chains.

Let’s look at the pros and cons of PoS:

DPoS is a modified PoS consensus mechanism that implements a voting system with two actors: delegates and voters.

Voters stake their assets and elect delegates to validate transactions on the network. This means that a delegate’s ability to become and remain a validator depends on their reputation. One mistake and they can be removed and replaced. Maintaining their reputation, therefore, becomes crucial.

WAX and EOS are DPoS blockchains.

The advantages and disadvantages of a DPoS consensus mechanism include:

PoA is a consensus model that might better suit private networks. Instead of staking the chain’s digital assets, a committee is entrusted to perform validation – in contrast to public (i.e., permissionless) participation.

The PoA consensus mechanism determines a fixed set of nodes to perform chain maintenance. These nodes earn the exclusive right to secure the network and validate transactions.

VeChain and private networks such as JP Morgan’s Coin Systems use this mechanism.

A PoA protocol has the following pros and cons:

PoC – also known as proof of space – requires miners to have available disk space to obtain mining rights and validate transactions. Similarly to PoW, in PoC, the rights to produce a new block are assigned proportionally to the space (instead of computational power) a given miner dedicates to the PoC system.

The blockchain industry is still relatively new, having existed for not much longer than a decade. Organizations and blockchain projects continuously look into how to build and improve on consensus mechanisms.

Input Output Global is one such example with its recent research into Ofelimos – a novel proof of useful work (PoUW) consensus mechanism that seeks to minimize the energy wastage in a PoW mechanism.

At the time of writing, no blockchain uses PoUW and any pros and cons of this consensus mechanism are only theoretical. Here's a possible advantage and a presumed disadvantage of Ofelimos:

Learn more about this new model by reading this in-depth article.