Several months ago, a team from Wanchain reached out to Input Output Global, Inc. (“IOG”) to discuss how to enable interoperability between the Cardano mainnet, Cardano sidechains, and other heterogeneous blockchain networks.

The goal? To build the infrastructure required to enable true RealFi applications spanning multiple blockchains to drive the adoption of Cardano’s ecosystem, Wanchain’s network-agnostic blockchain interoperability solutions, and support the future of Web3.

It soon became apparent that this was a monumental task requiring the input (and output!) of multiple teams. Indeed, connecting Cardano to heterogenous blockchains would be a complex undertaking, since Cardano is fundamentally different to most other blockchain networks. Of note, Cardano uses:

Each of these differences are worthy of their own dedicated post, but suffice to say that, combined, they presented a unique obstacle limiting Cardano’s potential for interoperability.

Teams from IOG, Wanchain and MLabs (an industry-best Haskell, Rust, blockchain, and AI consultancy) collaborated to design an actionable plan to make Cardano interoperable and now, with the foundation of an interoperability solution for Cardano in place, the time is right to share  some details about what has thus far been an exciting endeavor.

In this article, we explain the basic infrastructure for connecting Cardano to heterogeneous blockchain networks, reveal a novel sidechain solution, and share this project’s near and long-term roadmap.

First, a bit about Wanchain. Wanchain is both a sustainable layer 1 PoS blockchain and a decentralized blockchain interoperability solution. The Wanchain layer 1 PoS blockchain is a full Ethereum-like environment that works with industry standard Ethereum tools, DApps and protocols. Importantly, it has some ties to Cardano. Wanchain uses Galaxy Consensus, a proof-of-stake consensus algorithm that leverages a variety of cryptographic schemes, including distributed secret sharing and threshold signatures, to improve random number generation and block production mechanisms. Galaxy Consensus, developed by world-class researchers and academics, is a continuation of Cardano’s own Ouroboros.

Meanwhile, Wanchain bridges are decentralized, direct, non-custodial bridges that connect both EVM and non-EVM networks without requiring any relay chains or intermediary networks. These bridges use a combination of Secure Multiparty Computation (sMPC) and Shamir's Secret Sharing to secure crosschain assets. Currently, more than 15 layer 1 and layer 2 networks (and counting!) are connected by Wanchain’s wide area network of blockchains. 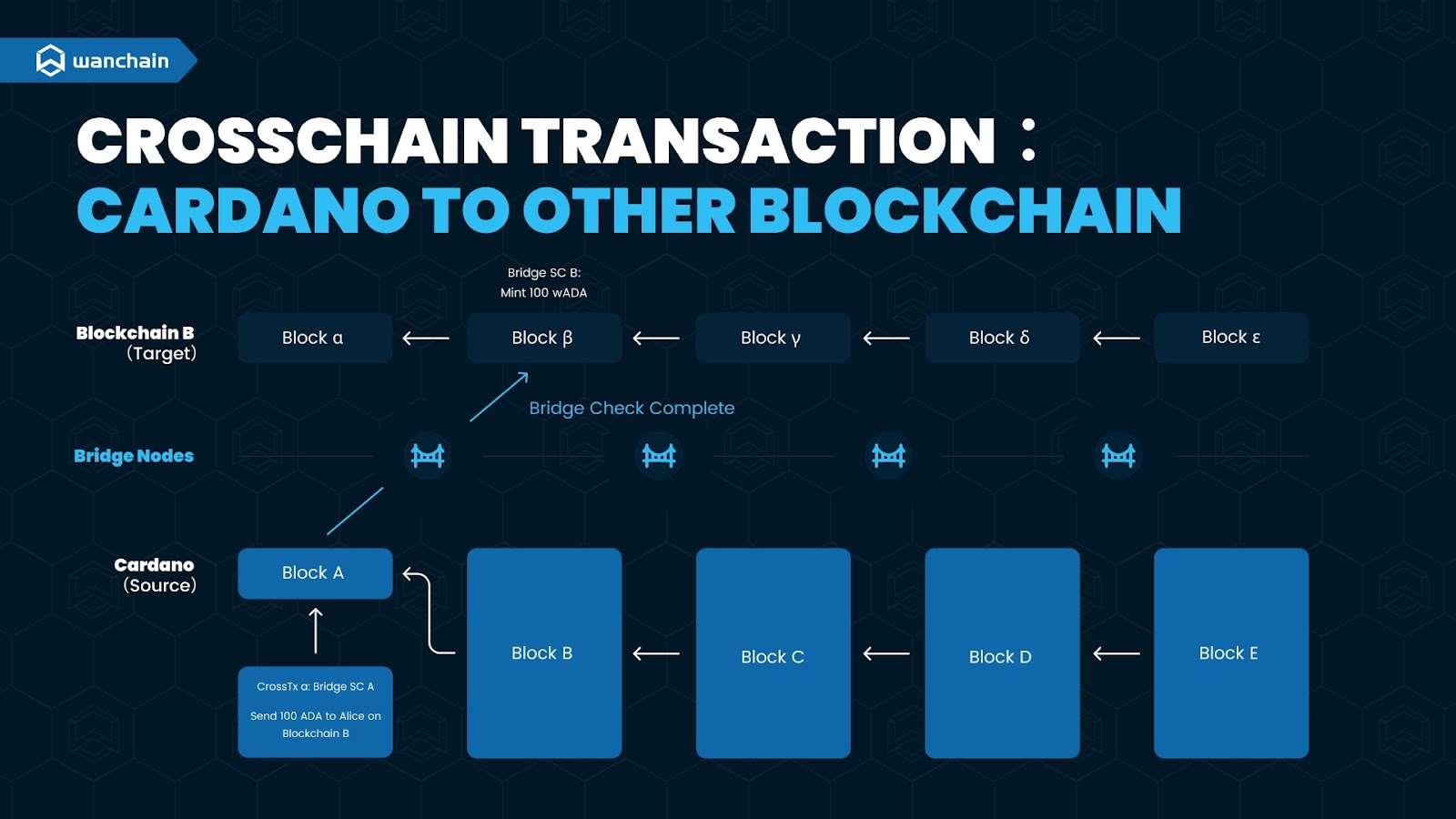 As mentioned above, Cardano has several fundamental differences that complicate the task of deploying crosschain bridges. Here is how IOG, Wanchain, and MLabs have tackled these issues:

Wanchain’s expertise is in connecting fully heterogeneous blockchains. The current crosschain infrastructure already includes blockchains that use EVM (like Ethereum and Wanchain), WebAssembly (like Polkadot), and even blockchains that have no virtual machines at all (like Bitcoin, XRP Ledger, and Litecoin). When possible, we solve this issue by developing native smart contracts on both the source and target chains. Otherwise, if a network does not support smart contracts, Wanchain bridge nodes jointly manage a dedicated lock account using sMPC. Wanchain’s ever-changing selection of permissionless bridge nodes then communicate with smart contracts (or lock accounts) on each chain, as needed.

Wanchain bridge nodes have adaptors to connect to different blockchains. The adaptors can construct transactions based on the transactional model of the intended blockchain. An API specification provided by IOG enables Wanchain to define the format of transactions to call smart contracts on Cardano.

This proved to be the biggest dependency for Cardano’s interoperability solution. Cardano originally supported EdDSA and Curve25519, not Schnorr and Secp256k1. Following a request from Wanchain and MLabs, Input Output coordinated internal efforts to add native support to Cardano for a Schnorr signature and Secp256k1 curve. Both will be publicly available following Cardano’s Vasil hard fork.

Ethereum co-founder Vitalik Buterin recently commented that he was pessimistic about crosschain applications due to the fundamental security limitations of bridges. Though we at Wanchain disagree with his conclusions, his concerns are valid. As such, special consideration is being taken to secure the crosschain bridges and maximize the security of Cardano’s interoperability solution.

The Cardano-Wanchain peg is based on a two-phase Merkle transaction verification. This proof mechanism includes the following components: 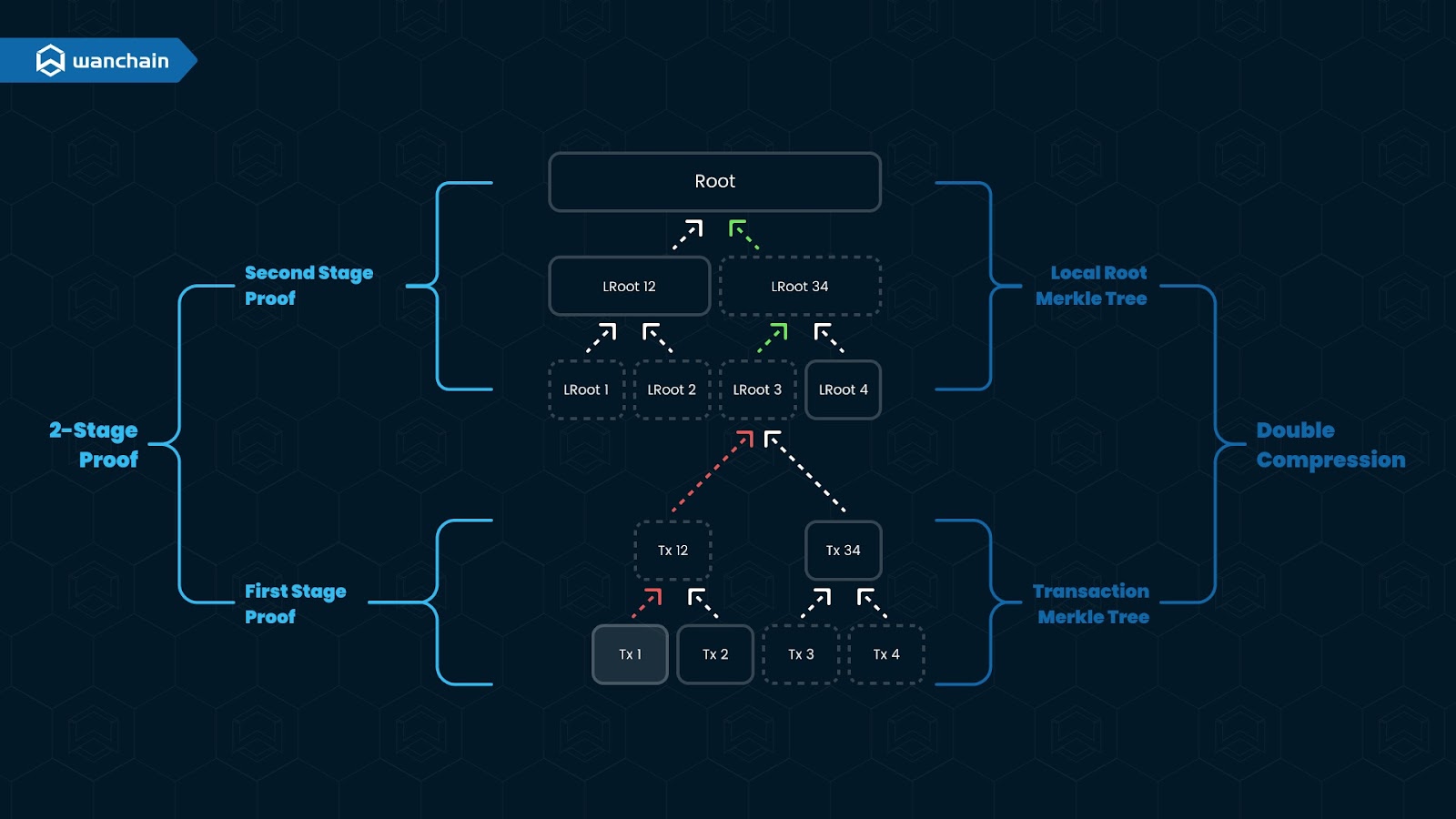 To prove the correctness of Tx1, the two-stage proof is constructed as follows:

The 2-Stage Proof is valid if the following equations hold:

Not only does this novel approach maximize the security of Cardano’s interoperability solution, it also doubles as a scalability solution. Transactions can now safely be moved off Cardano, recording only the vital information on the layer 1 blockchain to ensure security and immutability.

The roadmap: near and far

Enabling full interoperability between the Cardano mainnet, Cardano sidechains, and other heterogeneous blockchain networks is a long term project. As such, this project will be defined by incremental improvements, rather than radical leaps.

The first basic Cardano-Wanchain bridge has been live in a test environment for several months, allowing wrapped ada to be minted on Wanchain. Following Cardano’s Vasil hard fork, these bridges will be deployed to the mainnet. 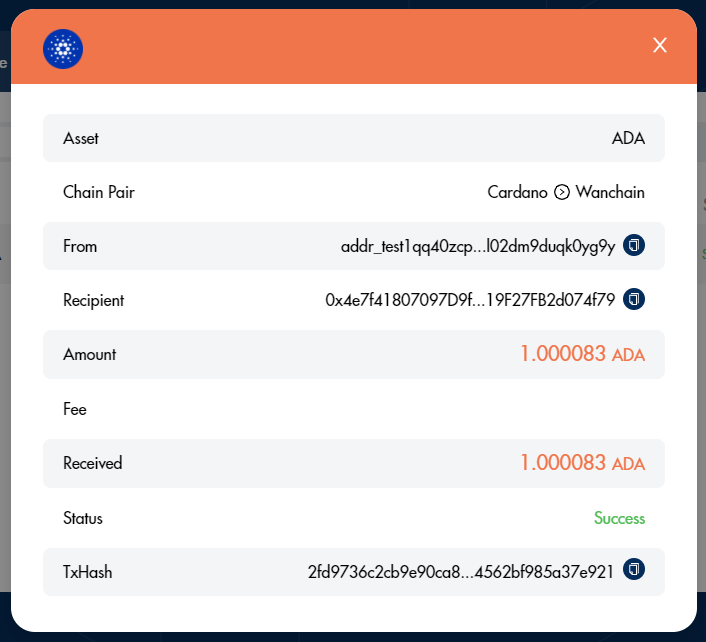 Meanwhile, work will continue to make Wanchain a formal EVM-compatible sidechain to Cardano. Once the two-phase Merkle transaction verification is in place, Wanchain will be positioned as a scalability solution for applications currently running on Cardano.

Over time, the full Cardano-Wanchain interoperability topology will take shape, as seen in figure 4 below. 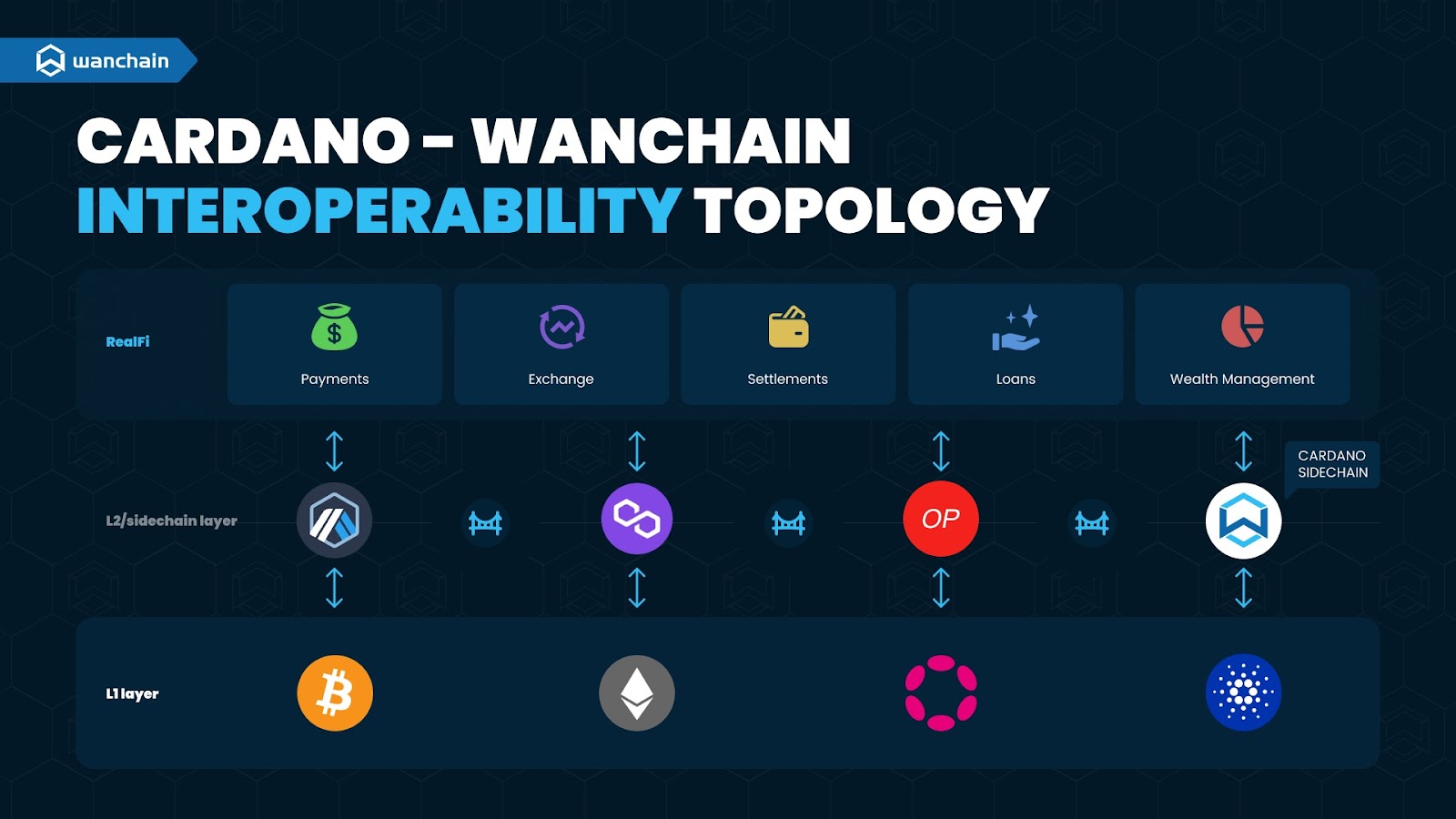 The topology’s bottom layer is formed by layer 1 blockchains such as Cardano, Ethereum, Cardano, Polkadot, or Bitcoin. These are all connected by existing Wanchain crosschain bridges. The vertical connections bridge layer 1 to layer 2 networks and sidechains such as Arbitrum, Polygon, Optimistic. The layer 2/sidechain layer is ideal to host tokens and RealFi projects. Assets crossing bridges in this layer do not need to pass through the layer 1 network to reach their target destination. Wanchain has already deployed several of these layer 1, layer 2 and sidechain-to-sidechain bridges.

As Cardano’s own sidechain strategy continues to mature, the interoperability solution that we are building today will be able to service Cardano’s crosschain and sidechain needs.

Disclaimer: The information contained in this article is for general guidance on matters of interest only. The material herein is provided for informational purposes only and should not be construed as investment advice.