What IOG has delivered for Cardano. Shelley: decentralizing the blockchain

Cardano’s development is guided by a methodical, research-based, and deliberate approach to innovation. Over five development phases, IOG introduced innovations, new functionality, and novel features, with each phase building upon the previous phase's achievements.

Chapter 1. Byron: the foundation of Cardano

Shelley created a decentralized economic system that drives Cardano’s growth and optimization. Moving away from Byron's federated network maintenance, more and more nodes were run by the Cardano community in a progressive evolution to full decentralization. Since the launch of Shelley, Cardano has gained over three thousand stake pool operators (SPOs). The SPO community greatly contributed to the success of the Shelley launch, playing an integral role in Cardano’s evolution from the early days of the ITN to the mainnet fork, and beyond.

Shelley focused on several critical steps to ensure an enhanced user experience for stake pool operations, delegation preferences, and incentives. As a proof-of-stake blockchain, Shelley allowed users to stake their ada to participate in network consensus. Painstakingly designed using game theory and the latest research into proof-of-stake networks, the delegation and incentive mechanism encourages users to delegate their stake to stake pools – always-on, community-run network nodes – and be rewarded for honest participation in the network.

Since the launch of Shelley, the IOG team has worked on many new features and upgrades, all intended to improve and optimize the user experience for both delegators and SPOs.

The staking and delegation strategies underwent parameter changes and calculation improvements, focusing on long-term benefits for the community rather than one-off profit. To level the playing field, IOG changed the network parameters to allow an even spread of the stake across the network, thus eliminating the potential for larger stake pools to dominate the ecosystem. SPOs and ada delegators could then experience more favorable staking opportunities for network sustainability and continuous returns.

In March 2021, block production on Cardano became fully decentralized when the d parameter was set to 0. This placed the responsibility for block production in the hands of the SPO community.

Along with these significant enhancements, IOG worked to expand Cardano’s functionality. For a better stake pool operation experience, RTView enabled real-time monitoring of node activities. IOG deployed the transaction metadata feature to allow the embedding of specific data to transactions, which was useful prior to smart contract support implementation.

Finally, data accountability has always played an integral role in staking and delegation. To enable better stake pool data tracking and maintenance, IOG implemented the SMASH system for recording stake pool metadata and has continuously improved the ranking system within the Daedalus wallet. These upgrades were based on user feedback and scientific research, which have driven user interface and user experience enhancements so that both SPOs and ada holders can seamlessly navigate between pools and their respective data. 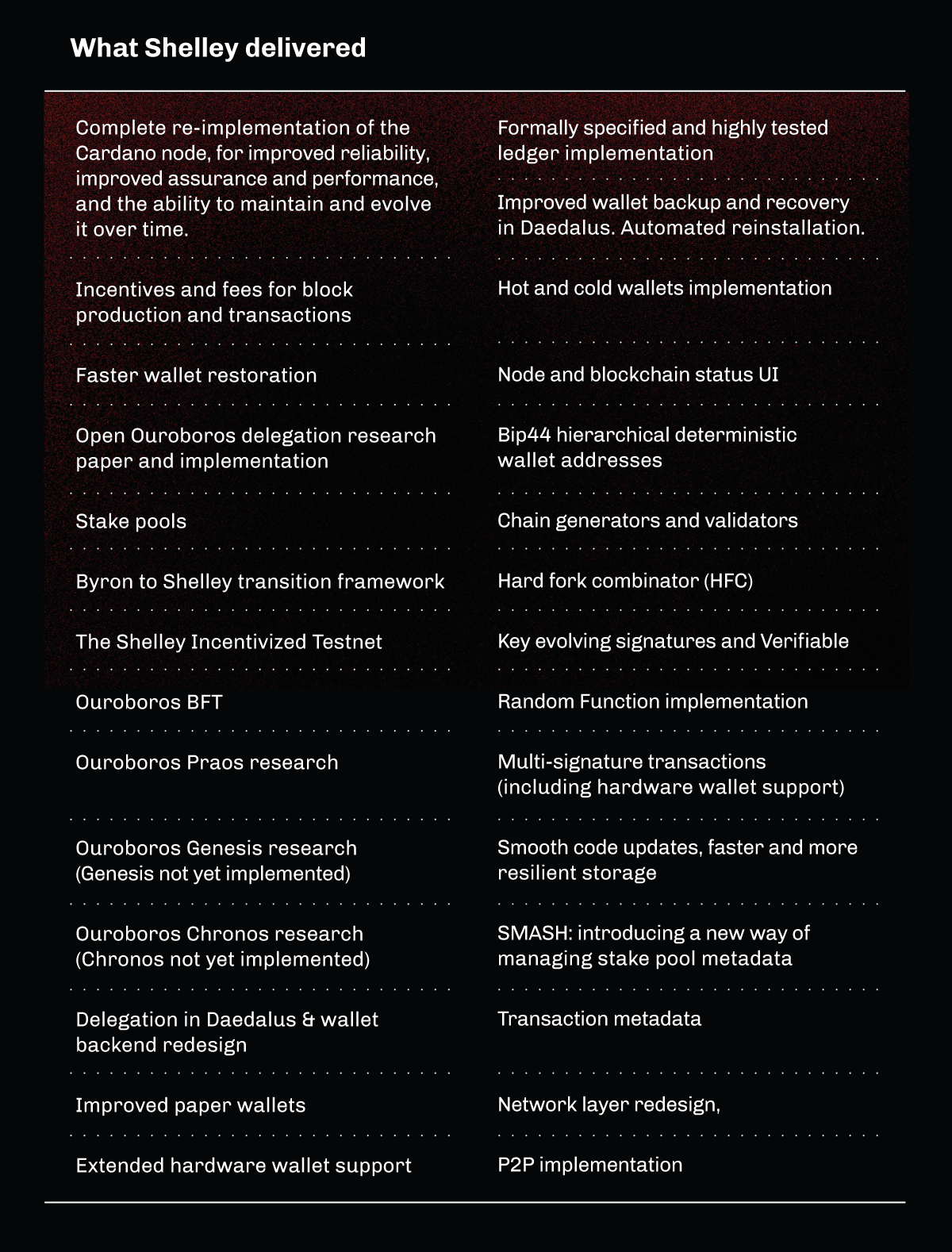 Shelley represented the natural maturation of the network, making it more useful, rewarding, and valuable for existing users new and old. Shelley was also about preparing for the future. Setting the stage for a distributed and functional network, Shelley laid the groundwork for Goguen, Basho, and Voltaire.